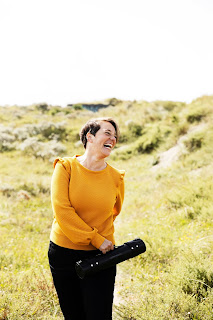 For more than 20 years now, German-born Jana Machalett, has lived in the Netherlands. She has established herself there as well as abroad as a popular flautist, especially in the field of contemporary chamber music.
Jana is a member of Ensemble Lumaka, focused on flexible configurations of players and programs, and Ensemble Postland, a contemporary group focussing on exciting musical adventures. She is also a member of Trio Het, a contemporary trio, and was a long-time member of Insomnio.
Alongside working with Lumaka, Postland and Trio Het, Jana is a regular guest flautist with other renowned groups such as Ensemble Modern and Asko|Schönberg.
She has also been invited to perform with the New European Ensemble, the Doelen Ensemble, the Ives Ensemble and the former Nieuw Ensemble.
CD projects include recordings with Ensemble Lumaka, Insomnio, Asko|Schönberg, Ensemble Modern and GRAM.

If you want to know more:
Next to making music I love swimming under the open sky, reading in the train, exploring new cities, playing tourist in my own town and writing old-fashioned letters.